Artist
Henneth Annun​
Why am I making this thread?
After talking with Leblanc we agreed that I could continue with Henneth Annun while he is busy with other stuff. Currently there are some things that don't match with the lore, most of which Eriol listed in the announcements thread. I would like to improve this, but sadly, this means we would need to alter quite a lot of stuff, which is why I want to ask your opinion.

Main cave
Currently, the main cave is too small and doesn't match the description in the book. Eriol posted a really nice map, which I tried making a bit more expansive with pencil and paper (I'm sorry about the handwriting and drawing skills ): 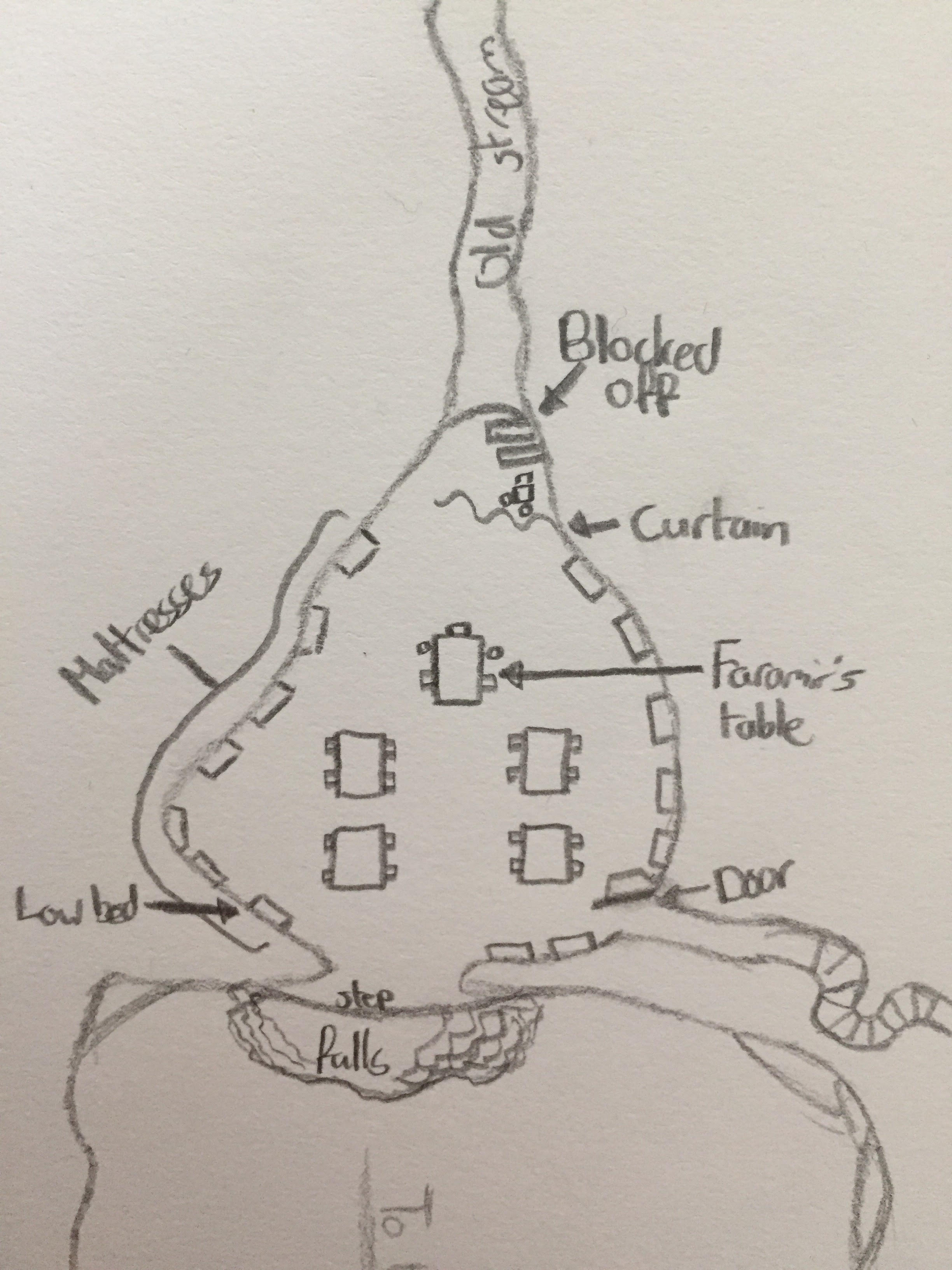 I may end up adding small rooms along the sides of the cave, but this is unlikely as Faramir was still very young, and this wasn't the main hideout of the Rangers at the time (at least, that's the way I see it, because at the time our server takes place Faramir is only 18 years old.). Because of this it wouldn't need as much beds, yet I still want to recreate the scenes described in the book. You can already spot some of the details described if you look closely, for example the two barrels the hobbits sit upon when they eat and the place where they talk with Faramir. Any feedback to this map is greatly appreciated. As you can also see, the step sticks out of the rock a bit, which brings me to my second point.

The Fall
Currently, the waterfall kind of has two falls: 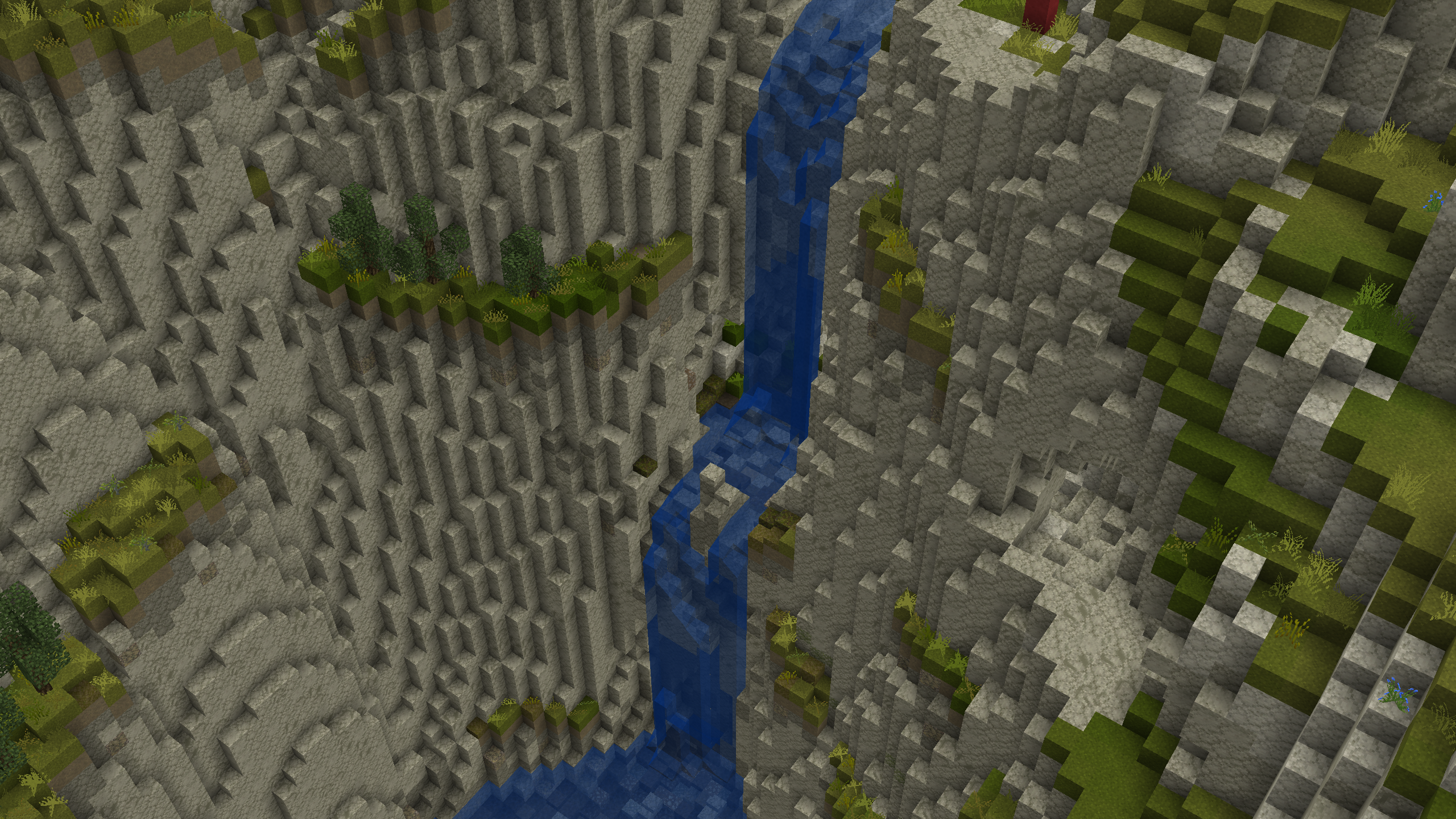 This leaves us unable to make any sort of step, which leads me to believe that it should be one continuous fall. Making it one continuous fall would mean that we can shift the entire cave forward, which makes the open air much more visible and it would be easier to see the sun in the west, even from the tables within the cave. Because of this we can recreate the scene very well where Sam, Frodo, Faramir and the other Rangers look westward towards the sunset. I'd like to know your opinion on this matter, as this would mean changing a bit of the terrain around. When I read the chapter again today, I couldn't spot any reference to these two falls, but maybe I missed something: please let me know.

Road towards the Southern Bank
Currently, this road is not going anywhere near the southern bank, and as such Frodo wouldn't be able to go near the waters of the basin. I'd like to reroute the road to go quite closely along the banks, and make a "path" down towards the water, because I couldn't find one at our current build. This path would be very, very rough and hard to see if you don't know it was there. 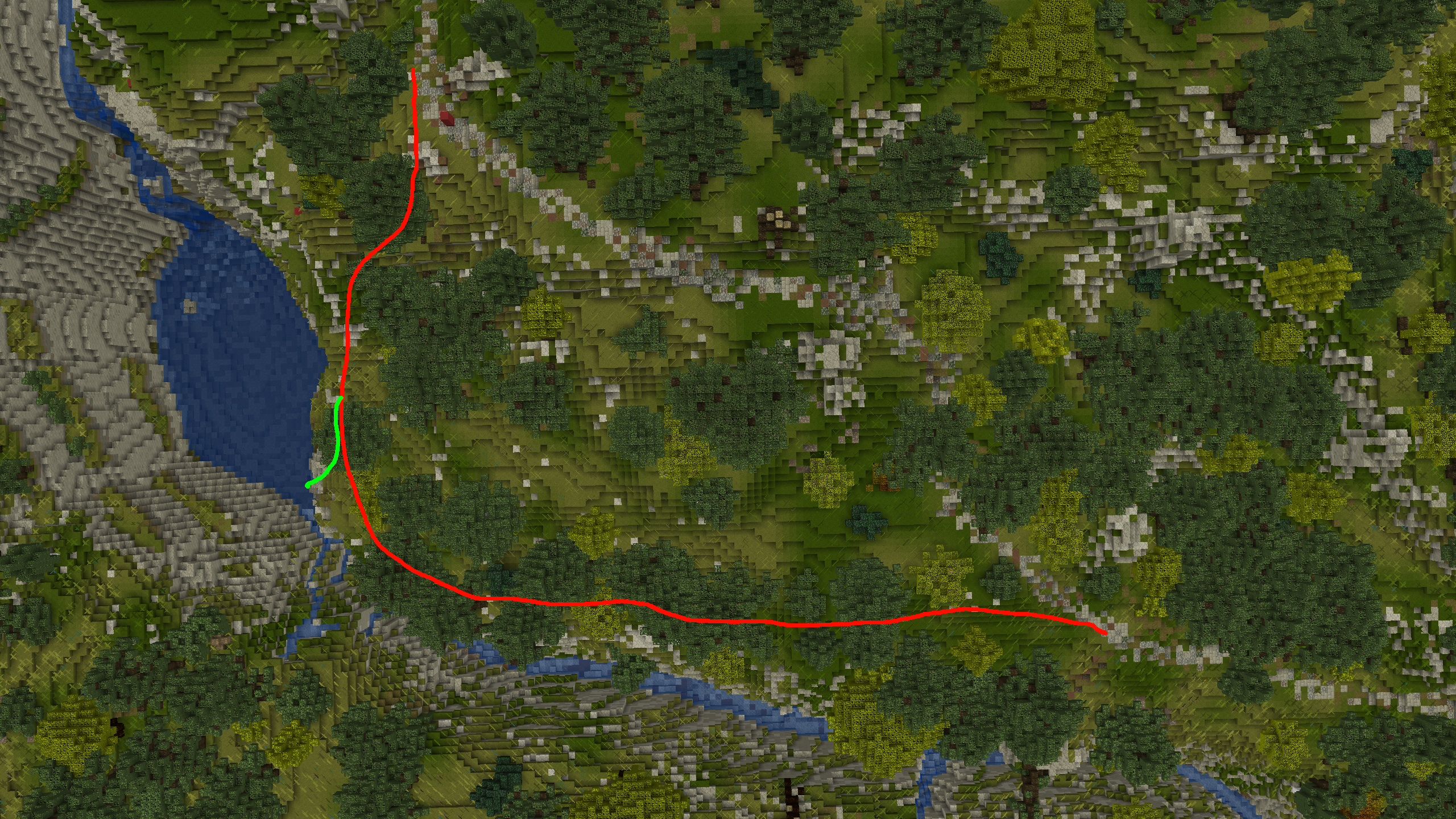 Red is the "main" road, green is the very hidden path down to the basin.
Looking westward
Currently, when looking westward out of the cave, the sun sets behind the cliffs and trees at around 5:30 PM. In my eyes this is a bit too early to actually call it a proper sunset, but it has to do with the river currently bending southward after the basin. This isn't what was described in the books, as you could even see the Anduin from the plateau on top of the banks. In my eyes this would be quite a straight river, continuously running westward until it joins the Anduin. 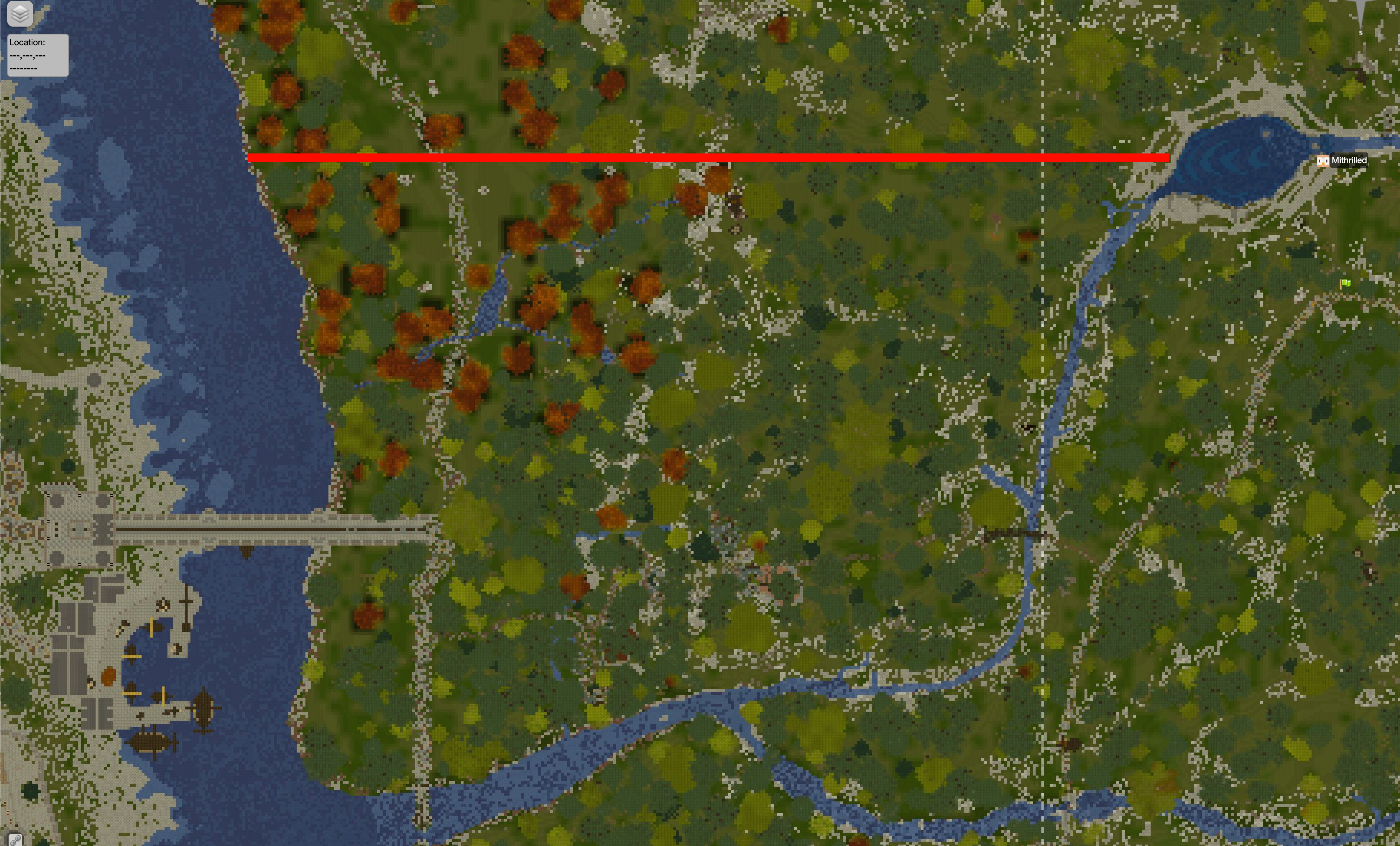 Red is the river, though note that this was just drawn up in Paint in a second.
This would give more clearance for the sun to shine through. However, I personally think this is beyond the scope of this project, as huge alterations to the terrain around Ithilien would have to be done, but I'd still like to hear your opinion on this.

Like Eriol said in his post, this can be such a cool project, and I'd like to make this as detailed and lore-accurate as possible. Because of this I want to hear your opinions on all that I have described above, and possible additions or ideas. Thanks for reading!
-Mithrilled

Staff member
Head Developer
Moderator
Developer
Donor
I would suggest to change the course of the small stream flowing from the pool. In the book there are "lowlands" and "broad meads". Here is how I imagine it:
Red: Cliffs
Blue: Streams
light yellow: area of major terrain changes 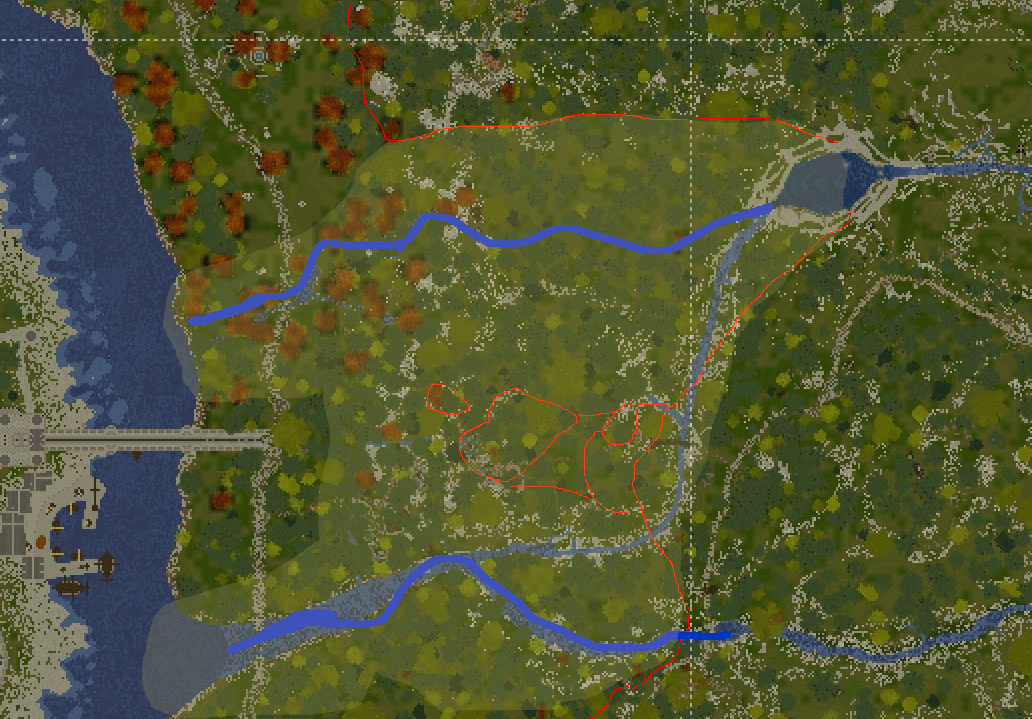 Eriol_Eandur said:
I would suggest to change the course of the small stream flowing from the pool. In the book there are "lowlands" and "broad meads". Here is how I imagine it:
Red: Cliffs
Blue: Streams
light yellow: area of major terrain changesView attachment 17905
Click to expand... 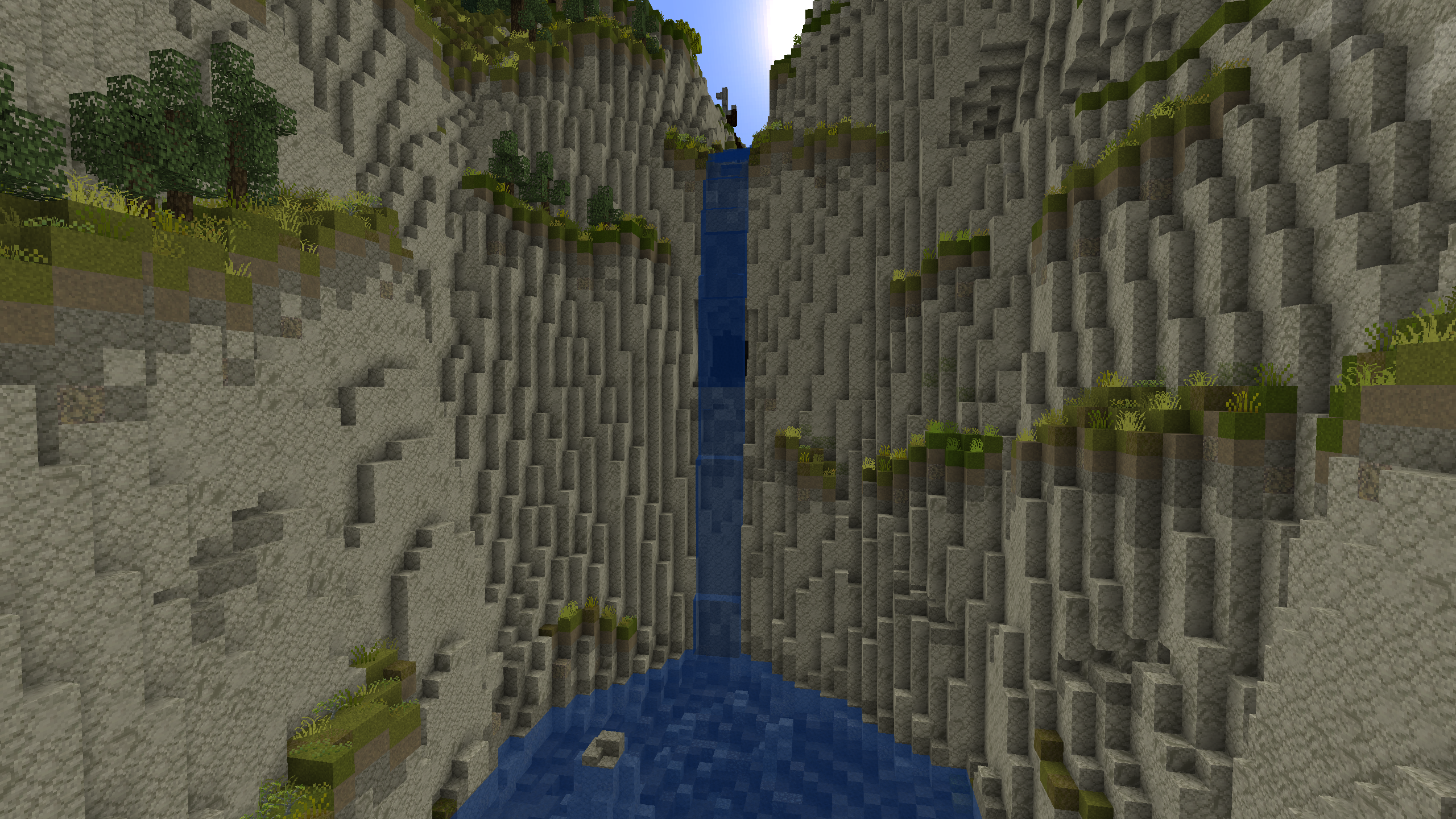 This is the new waterfall, it was harder to make than expected. It is more lore accurate however I'd like some opinions on how to improve it more, as I think it's still a bit boring. Any feedback is greatly appreciated, as always (*cough* @NicTheFifth plz *cough*)


At once they found themselves in a rock-chamber, wide and rough, with an uneven stooping roof.
At their right, eastwards, the torrent fell, splashing over many terraces, and then, pouring down a steep race, it filled a smooth-hewn channel
From here two flights of steps led: one going on, as it seemed, up on to the high bank of the stream; the other turning away to the left. This they followed. It wound its way up like a turret-stair.

Artist
Hey Nic, thanks for reading the chapters as that's always nice to see. I'll probably redo the main cave to make it a bit bigger and give it a bit more interesting shape, because as we discussed at the moment it is a bit boring (the shape that is). Will probably take me some time to get it right but will be worth it. For the other points, I haven't come around to them yet but I am aware of them after reading the chapters a few times. I'll redo some of the cave-path going towards the main cave and change the terraces up there (I think I already marked them saying I was going to do that). Same goes for the third reference, especially excited to see how the turret-stair turns out

Donor
Why even have a road at all? Henneth Annun was one of the last hideouts of the rangers in Ithilien and the way was a complete secret ot anyone but those who know where it is. I don't think the rangers would want orcs finding the road and stumbling upon the window on the west.

Artist
With the actual main cave being finished, I am looking for some concept pictures of gorges and waterfalls, but also of "lowlands and broad meads". You can just show them in a comment on this thread or DM them to me, I appreciate it a lot. I really hope to make this project unique in it's lore-accuracy and realism . Any other feedback is of course also welcome

Thr33way said:
Why even have a road at all? Henneth Annun was one of the last hideouts of the rangers in Ithilien and the way was a complete secret ot anyone but those who know where it is. I don't think the rangers would want orcs finding the road and stumbling upon the window on the west.
Click to expand...

Simply because it was described in the books really: I will also attempt to make the entrance of the path towards the cave more hidden with bushes so Orcs indeed can not just stumble upon it, thought that would be hard either way. Even when looking at a waterfall, you can not see what's behind it in real life so I don't think orcs could easily find it without knowing the location, but I'll try making the entrance more hidden
Edit (12th of july):
Thought I'd show some of my concept pictures I've found for the new valley:
Imgur album for valley
In the description of the pictures I state why I think it would be appropriate, and as always more pictures are appreciated. You can comment on here or DM them on Discord.
Last edited: Jul 12, 2020
You must log in or register to reply here.
Share:
Reddit Pinterest Tumblr WhatsApp Email Share Link
Menu
Log in
Register
Install the app
Top